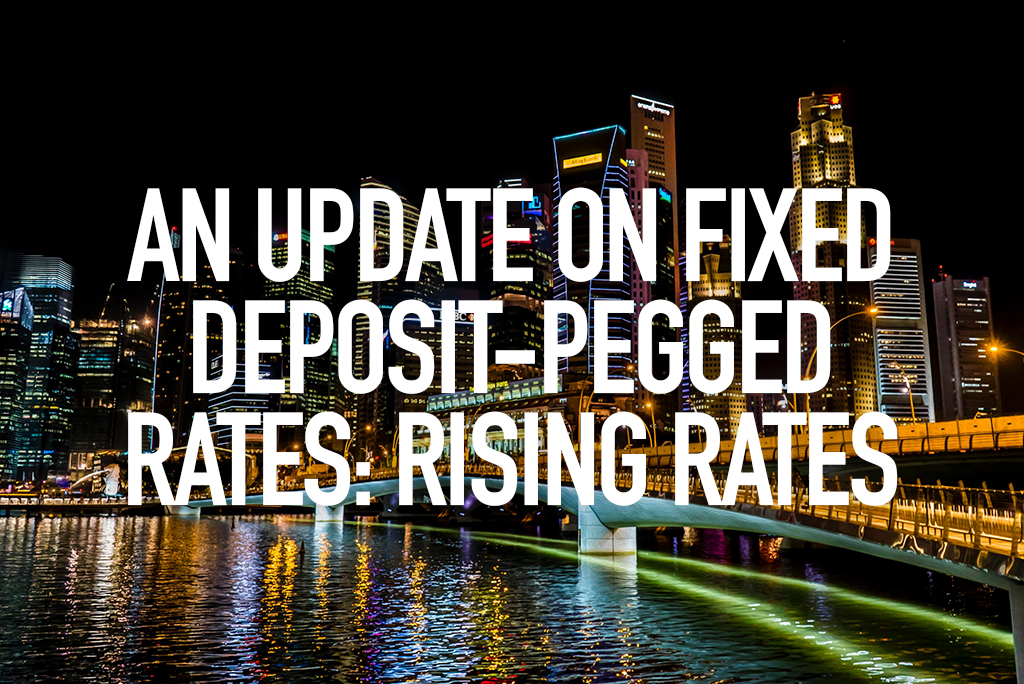 A home loan package with its interest rate pegged to a bank’s Fixed Deposit (FD) rates was widely popular among homeowners during its initial inception. FD rates were first pioneered by DBS, and her peers came up with their own versions soon after.

The FD rates’ popularity was attributed to a very low rate in the initial phase. However, in recent years, FD rates have increased significantly when compared with the initial rates. This increase in interest rates is due to many factors, one of them being that the Singapore Interbank Offered Rate (SIBOR) rate is constantly increasing, thus resulting in the increase in the cost of borrowing for the banks.

Since this is directly correlated to the liquidity of the banks, an increase in their FD rates is apparent. The table below summarises the recent rate hikes by various banks as compared to when it was first introduced:

Legend:
*Packages that are not pegged to fixed deposit rates
Packages in red indicate each bank’s current offer
At time of posting, rates are accurate; however, they can be subjected to change.

Now, when looking at the SIBOR rates’ trend over the years, we would have realised that it has been increasing over the years as shown in the trend line below.

So what causes the increase in SIBOR?

In the 2008 global financial crisis, the United States (US) central bank introduced quantitative easing in 3 tranches. Thus there was a decrease in interest rates to 0-0.25% since business entities would not deposit monies to the central bank; instead, the bank would lend out money. The lower borrowing cost made it easier for companies to borrow.

Next, more money was printed, which resulted in an increase in the supply; when the supply increased, the US dollar is no longer as valuable as before, thus its depreciation. Companies at that time were borrowing money at lower costs to revive company cash flow so they could focus on production, increase in research and development (R&D), and increase employment. More jobs were created in the market, wages started to increase and people, in turn, had a higher spending power which would spur economic growth.

Depreciation of the US dollar also allows other countries to buy the exports from the US at a cheaper price which then result in an improvement in the export industry.

Since it was unwise to deposit their money in the US back then, all the money started flowing into Asian markets. Singapore, in turn, benefitted the most from liquidity. In recent years, the US started making claims about hiking interest rates; however, no action was taken until December 2015, when the first increase came about. Following that, there were 8 more increments.

As interest rates start to increase, central bank rates become higher. People will once again start putting money back into the US and exit the Singapore market. Therefore, liquidity once again becomes a problem, which has since resulted in an increase in SIBOR.

The US Federal Reserve has signalled that the growth in the FED rates will be pretty modest. There are speculations that the FED funds rate will stay at the current range of 2.25-2.50 percent until at least the end of 2020. Since FED rates are likely to remain relatively constant and that SIBOR and FED rates have a high correlation, it is likely to see the SIBOR stay relatively constant. This is evident in the recent SIBOR growth trend, when looking at the first quarter of 2019.

In view of FED rates remaining relatively constant yet FD rates are rising, it may be wise to refinance to SIBOR-rate loans instead of choosing a loan package with its interest rate pegged to a bank’s Fixed Deposit (FD) rates. This will protect you from having to pay more if you choose FD rate-pegged packages should interest rates soar in the near future, and this will definitely be a significant amount of cost savings.

However, this is not a one-size-fits-all solution, and many of the claims are based on the current speculations of the FED rates staying constant. If you are still unsure, then it would be best to consult the experts, such as our team of mortgage advisors at Redbrick.

Orchard Road: At an all time low
Scroll to top
WordPress Image Lightbox