Blog - Latest News
You are here: Home1 / Blog2 / A race to keep our heritage alive, but at what cost? 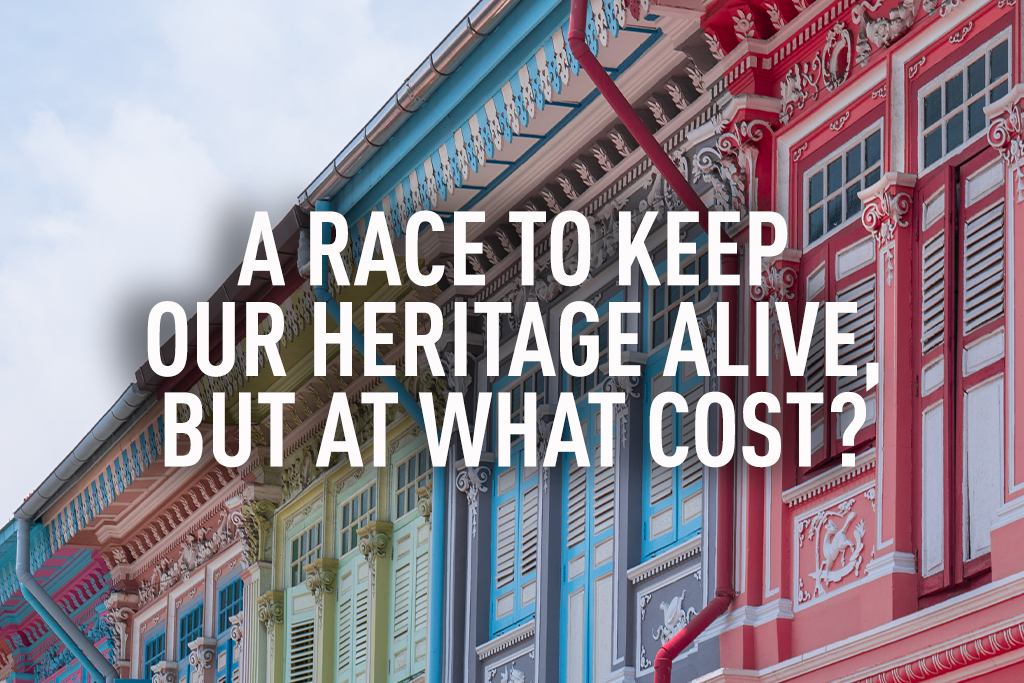 Chinatown (牛车水) – directly translates to ‘bullock water-cart”. One of Singapore’s most iconic tourist destinations located in the heart of the lion city boasting of a rich Chinese culture and pop-up stores selling traditional merchandise, it is hardly similar to the Chinatown just 50 years ago. As its name translates, Chinatown used to be a district which saw a bull-driven water cart which carried water from a well in Ann Siang Hill daily for sale to residents when steady water supplies were yet to be established in Singapore.

While this sight is no longer seen today, the architecture remains largely intact like a timeless piece of a long-gone past Singapore. Chinatown is just one of the many Urban Redevelopment Authority’s (URA) preserved sites, with Golden Mile Complex recently added to the list of conserved buildings. As Singapore’s cityscape continues to evolve, will these out-dated infrastructures become trash or treasure? Read on to find out more!

Benefits of conserving a piece of history

The benefits supporting the conservation of historical sites and prominent landmarks are often found in the intangible aspects of society. Most of the time, the conservation of these sites may incur high costs due to maintenance of rundown facilities and to protect the structural integrity from all the years of wear and tear. However, not everything can be bought with a price, and the same goes for the essence behind these landmarks.

More often than not, these sites carry with them rich historical and cultural origins. Some examples include the ‘black-and-white’ bungalows, with less than 100 left in Singapore. These Good Class Bungalows originated from early days of Singapore during our time under the British colonial rule. The conservation of these buildings serve as a reminder of Singapore’s roots, and could serve as a point of awe amongst all who see it, and to reminisce how far Singapore has truly come all the years.

The conservation of certain historical sites such as the shophouses along heartlands such as Jalan Besar and Chinatown serve a higher purpose, social identity. While the heart behind Singapore as a multi-cultural and multi-racial country still stands, individuals across various races and cultures inevitably still find comfort and solace in the familiar and similar. This innate human behaviour substantiates the need for these prominent landmarks and features to be conserved down through the generations, for they form the foundation of many social fabrics.

This is a governmental attempt to strike a healthy balance in social integration, while ensuring that racial and social enclaves do not form in an excessive and uncontrolled manner which can be divisive for the nation which depends on the unity of its people as its sole natural resource.

In a study published by ScienceDirect, urban planner Tan Shin Bin found a surprising correlation between housing prices and its proximity to conserved sites. Conducting a study across millions of housing transactions between 1997 and 2017, there was concrete evidence that the conservation of a site leads to its neighboring real estate going at higher than usual prices, most pronounced within the radius of 800 meters to 1.6 kilometers.

So, if you happen to live near a conserved site, you might just be in for some extra cash profits should you sell your home!

Unfortunate costs of preserving our roots

Most of the conserved sites date back several decades, some even more than a century. A humid and moist climate here in sunny Singapore would inevitably compromise on the structural integrity over time, rendering it unsafe for occupancy. Hence, the decision concerning the conservation of sites would have to first consider the financial costs of maintaining the building.

Depending on the severity of damage, maintenance costs of these sites could run in the millions, which could incur an opportunity cost for governmental expenses where the expenses could be otherwise spent on other aspects of society that can yield a greater benefit to a wider population as opposed to maintaining a single building, which is not something that everyone benefits from.

Another problem arising from the preservation of these sites would be possible gentrification. Gentrification is a big term for most, but it simply refers to the process in which a neighborhood character is changed to cater more to affluent individuals. This has become a recent point of debate and concern amongst urban planners and social groups. You may be wondering, how does building conservation lead to gentrification? More often, site conservation comes not only with maintenance and damage repair works, extra effort is taken in the immediate neighborhood such as the inclusion of landscaping, construction of malls and amenities and the addition of other activities that adds to the positivity of the land use.

Overall, the surrounding neighborhood would see greater quality of living with greater lifestyle options and accessibility offered, which would lead to higher property prices. This would then attract wealthier and more affluent residents, who would then form an unintentional enclave, reducing inter-social integration and interaction. The zoning of these sites may also bring about unintended windfall benefits and positive externalities to its surrounding neighbors, and currently there is no appropriate tax policy to curb this from happening which can affect the true and fair valuation of the land.

Last but not the least, conserved sites could hinder land development plans for the future. As Singapore’s landscape goes through constant molding and change, a decision to conserve a site today may be an obstruction for tomorrow. Conserved sites often have existing low gross plot ratios, and tend to be towered over by newly-built office towers. Therefore, the conservation of a building may result in a lack of uniformity and consistency in the area.

The debate on whether building conservation is a worthwhile venture remains an open debate, both coming with its costs and benefits to either option. What is your opinion on the conservation of landmarks and buildings, trash or treasure? Jennifer Tan
Jennifer Tan was in the service industry for 10 years before embarking into entrepreneurship. She had achieved excellent interpersonal skills and a strong analytical mindset through her accumulated experiences from both industries. Jennifer aims to help clients at Redbrick achieve their property goals by listening attentively and providing personalised solutions for each of them.

Are you applying for a BTO in 2021 for the first time?

How would a low Interest rate environment affect you?
Scroll to top
WordPress Image Lightbox