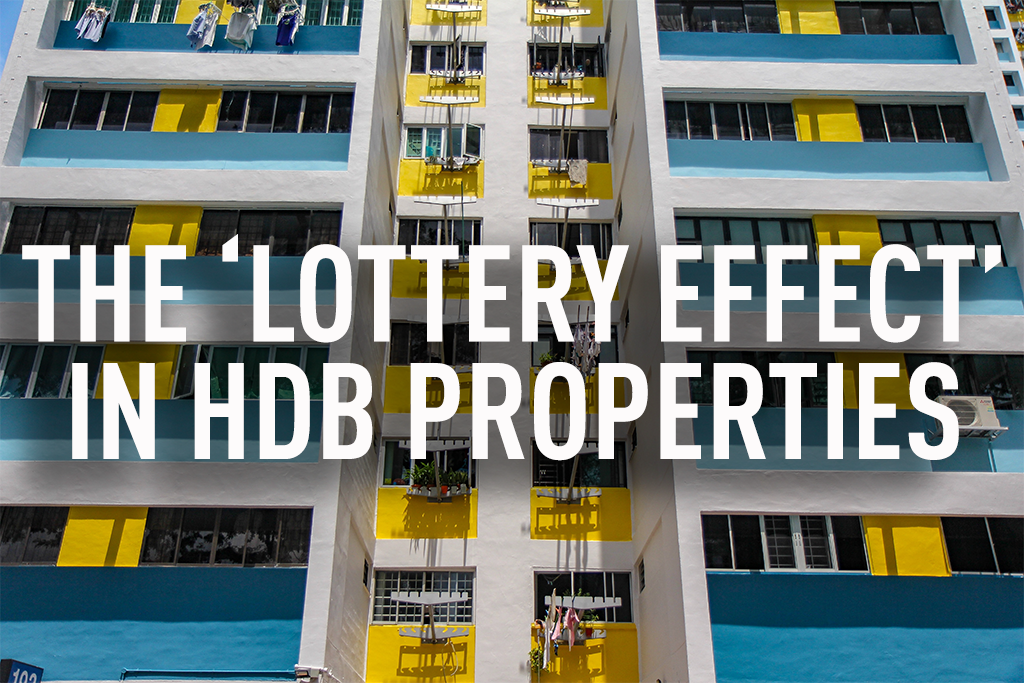 The ‘Lottery Effect’ of HDB properties have once again become a hot topic of debate as the Minimum Occupation Period (MOP) of some 50,000 flats were expiring in 2020-2021. National Development Minister Desmond Lee had also stepped forward to advocate for a new housing model for public housing in ‘new areas with prime attributes.’.

The term ‘Lottery Effect’ refers to the reliance on chance and luck when balloting for a new BTO unit, especially those in prime areas with high resale value, such that being allocated a unit is like striking the lottery. Following the sale of a five-room flat along Boon Tiong Road for the price of S$1.2 million, which was then a record price for the HDB resale unit, concern have been raised surrounding the ‘windfall effect’ of the purchase and sale of such units.

This phenomenon can be observed in areas such as Dawson, Bukit Merah and Boon Tiong. Dawson and Boon Tiong have recently completed their five-year MOP and some owners scored a gain of 60-70 per cent for the resale of their properties.

So, what are some implications of this ‘Lottery Effect’?

The government is concerned over the potential gentrification of these estates such that the residents will only be made up of wealthy families, defeating the purpose of subsidised BTO units in the first place. Furthermore, such units are also seen as inequitable, especially for young couples who found difficulties in obtaining a BTO unit after several tries.

Experts have brought up the potential of similar occurrences for the highly anticipated Greater Southern Waterfront poised to become part of the Central Business District. Minister Desmond Lee have addressed some concerns over the development and recognised that a new pricing model will have to be applied to ensure fairness in distributing highly sought-after flats in choice locations. As of now, the government is welcoming ideas and suggestions on the restrictions of resale conditions for future prime area projects.

Instead, we will explore the potential solutions and its implications.

Ms. Wong, Head of PropNex’s Research and Content suggested that a shorter lease term of 50-70 years instead of the default 99-year lease term may alleviate the lottery effect by keeping BTO prices more affordable. As a result, those looking to buy the flats on the resale market after the MOP will be faced with limited capital upside due to the shorter remaining lease. This can also be paired with a longer MOP to further reduce the potential capital gains from the resale of the HDB unit.

Critics of this solution question the effectiveness, arguing that anyone who is allocated a unit can enjoy subsidies and grants for first-time buyers. In some way, they are still ‘lottery winners’ and will be able to resell their flats with relatively long remaining leases.

Furthermore, others had also commented on the administration of longer MOP periods. Ms. Christine Li, Head of Research at Cushman and Wakefield noted that there will likely be an influx of appeals regarding exemption from MOP and the need for more administrative manpower to handle the appeal process.

Other solutions can include imposing a capital gains tax on the profit from the sale of the HDB flat or a resale levy for prime HDB flats. Both methods aim to lower the return from the resale of HDB units as well as deter investors and speculators from flipping properties.

However, a capital gain tax could have adverse effects not only in the public housing market but also in the private housing sector. The private housing market relies on HDB upgraders to support the demand for mass-market condominiums, who are reliant on profits from the resale of their HDB flats to purchase a condominium. By restricting the returns from the resale of HDB flats, even though it does not fall into the extreme category of ‘lottery effect’, it affects the ‘unwritten social contract’ between the people and the government.

Furthermore, the absence of a capital gains tax is one of the biggest drawing points of Singapore as a wealth capital and greatly contributes to the value of Singapore properties as an investment class. Its implementation could give rise to an ‘increase in sophisticated wealth and succession planning’ as individuals are more incentivised to ‘explore tax-efficient holding structures to avoid hefty taxes payable when assets pass between generations’, explained Mr John Tan, a senior associate of banking, finance and property at Wthers Khattarwong.

Hence, another solution supported by experts is an increase in resale levy, especially one that is progressive and tied to the resale of prime HDB units, such that higher levies for shorter years of ownership.

Is the ‘Lottery Effect’ a pressing concern?

Whether the topic of ‘Lottery Effect’ is a cause for concern has drawn mixed reactions from analysts. Sky-high resale values of certain prime HDB flats have made headlines in the media but it is not as common as one might think. In fact, HDB flats selling for at least S$ 1 million only made up of 0.3 per cent of total resale transactions this year and its adverse consequences may not be significant. The case of the Boon Tiong flat is not representative of many other estates in ‘prime locations.’. Historical data has shown that it is mostly the larger units that witness greater return on investments and not all flats in prime areas can constitute as a ‘windfall’ but that of select HDB developments.

Mary Ann Bey
Mary Ann graduated from the Royal Melbourne Institute of Technology with a Bachelor's Degree in Business Management. She had actively supported the sales and business development functions for more than half a decade within the Offshore and Marine industry. Through her experiences, she had discovered the importance of always being able to see the "big picture", which drives her to create sustainable solutions for her clients. She enjoys meeting people from all walks of life and has developed the ability to actively listen to uncover their real needs.

How are we celebrating Chinese New Year differently in 2021?
Scroll to top
WordPress Image Lightbox