Since its independence in 1965, Singapore has undergone rapid transformation, with the development of modern infrastructure, a thriving economy, and a diverse population. One of the key strategies that has shaped the city’s development is the creations of new towns in the suburbs, as outlined in the first Master Plan in 1958. The Housing and Development Board (HDB) has played a central role in implementing this vision, building public housing estates and other amenities to accommodate the growing population.

The model developed by the Urban Redevelopment Authority (URA) in Singapore is designed to guide land use allocation and physical planning practices. According to the URA, 30% to 40% of land in a new town should be set aside for homes, while one-third should be allocated for residential and commercial projects. The remaining land is intended for use as highways, services, schools, institutions, recreational fields, parks, and playgrounds.

Singapore is known for its commitment to preserving green spaces, as demonstrated by the over three hundred parks and four nature reserves. East Coast Park is the largest and most popular park in Singapore, attracting 7.5 million visitors each year. The Southern Ridges is a 10-kilometer-long contiguous urban green space that includes Mount Faber Park, Telok Blangah Hill Park, Hort Park, Kent Ridge Park, and the Labrador Nature Reserve.

The “Singapore Playground” is a network of parks that ranges in size from city to town and regional parks, connected by park connectors and designed with various themes to provide visitors with a variety of leisure experiences. This park system reinterprets ideas and principles about “history” and “nature” based on colonial and western park architecture, as well as reflects the mechanisms and actors that shape the built environment.

The concept of the “Singapore Playground,” which was developed and promoted by government institutions in the early 1990s, represents the idea of “social constructions of nature”. The “Singapore Playground” repurposes and includes all parks built since colonial times within a shared system of nation building.

The “Singapore Playground” concept represents an ideology that recognizes that parks serve as both recreational opportunities and sources of national identity, but also emphasizes the use of park theming as a way to show the public that the government has successfully addressed the cultural, social, and ecological challenges posed by high-density city living through park planning and design.

Although the structures within the parks may not feature ornamentation in a modernist style, the ornamental planting scheme, a range of amenities such as playgrounds (with generic PVC equipment) and rest areas, and the installation of community gardens serve as the theme of the gardens.

In the 1970s and 1980s, the Housing and Development Board (HDB) in Singapore created a series of concept playgrounds in the public spaces of new towns. These playgrounds, which were regularly featured in HDB’s newsletter ‘Our Home’ and distributed to all households, aimed to teach residents about citizenship and to help them feel like part of a community. The concept playgrounds featured reinterpretations of Asian cultural landmarks and tropical flora and fauna, as well as everyday objects such as clocks and lorries. In addition to selecting specific types of trees, shrubs, and flowers for each precinct, the HDB design team paid particular attention to the design of focal point such as entry plazas, playgrounds, and outdoor seating areas.

In the 1990s, the HDB began hiring local artists to design sculptural parks, including parks with sculptures as the primary design feature and parks with sculptural playgrounds. One example is Tampines Central Park, a neighbourhood park in Tampines New Town that was developed in 1987 and features large scale fruit-shaped playgrounds designed by members of the HDB’s Architecture Section. These playgrounds were part of a collection of concept playgrounds created by the HDB design team between the 1970s and 1990s to provide play space for young residents while also adding character and identity to the suburban public open spaces.

Singapore’s playgrounds offer a respite from the busyness of daily life, whether you’re looking for a fun weekend outing or a way to de-stress after a long day at work or school. These playgrounds, which are an integral part of Singapore’s park system, combine the traditional park-theming philosophy with a focus on sustainability and the environment. As a result, they offer unique and enjoyable experience for all visitors.

The Housing and Development Board (HDB) in Singapore is committed to creating healthier cities by providing a wide range of services to meet the needs of residents. This includes sports and cultural facilities, such as neighbourhood parks and children’s playgrounds, within housing projects. According to singstat.gov (2019), these amenities are an important part of HDB’s efforts to promote healthy living and community engagement.

Playgrounds in Singapore’s public housing estates provide children with a safe and fun place to play and interact with their peers. Many of these playgrounds are located in open, easily accessible areas within the neighbourhood. In addition to traditional playground equipment, some of these parks have incorporated elements of the ABC Waters design, which uses plants and planting media to naturally filter and purify water in ponds and rivers.

For example, the cleaning biotope in these parks is made up of plants that absorb and filter contaminants, while the water playground uses water that has been purified through UV injection. These parks are also designed to encourage visitors to engage with nature and the naturalized river, and the areas around the river are able to withstand changes in water levels.

The construction of a heartland playground in Singapore typically costs between $50,000 and $100,000, and the playground sector is made up of about ten businesses. Six of these businesses are members of the Landscape Industry Association of Singapore, which was established in 2014. Some of the notable parks in Singapore include Admiralty Park, Ang Mo Kio Town Garden East and West, Bedok Town Park, Bishan-Ang Mo Kio Park, Bukit Batok Nature Park, Bukit Batok Town Park, Changi Beach Park, and Jurong Lake Gardens, which is the largest playground in the country.

Another noteworthy playground is the Jelutung Harbour Playground, located in a suburban neighbourhood. This park features a variety of playground equipment, including slides, swings, a merry-go-round, and climbing nets, as well as a water play area with fountains, water cannons, jet sprays, and a mini splash bucket. There is also a small changing and shower room next to the playground, so visitors don’t have to worry about returning home in wet clothing.

When you are selecting your next home, you can consider looking out for these playgrounds as they provide a fun and enjoyable experience for children and families. At the same time, you can contribute to the development of healthier and more vibrant communities. 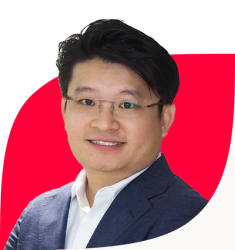 Andy Yew
Andy started his career in Bancassurance, in a foreign bank back in 2008. After 14 years of working in the finance industry, Andy has developed great ability to listen and understand his clients’ needs.

With a keen sense of numbers, deep knowledge in wealth planning and excellent interpersonal skills, he will be able to assist homeowners to avoid expensive financial pitfalls throughout their lifetime.