Blog - Latest News
You are here: Home1 / Blog2 / Which projects should you look out for in Singapore’s largest BTO launch t... 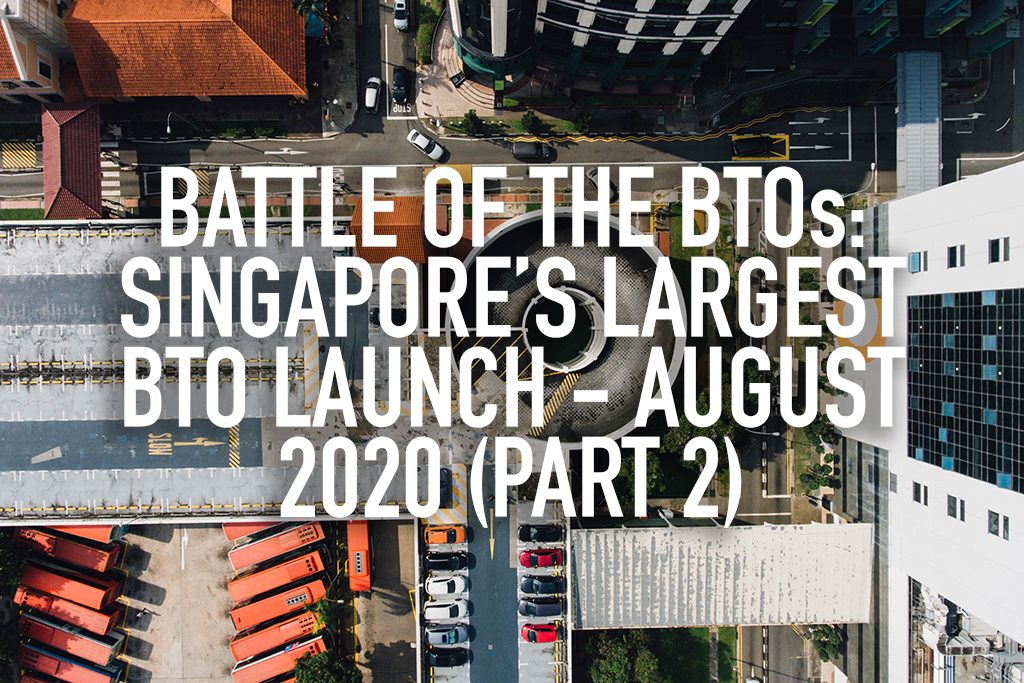 With BTO applications just right around the corner, we bring to you the second part of the August BTO project launch overview. In our previous article, we took a closer look at 2 main projects to be launched in the non-mature estates, namely Woodlands and Tengah. For those gunning for a shot at a mature estate, this article is the one for you as we take you through an overview on which projects truly caught our attention. It is well known that a unit in a mature estate is a prized opportunity, given the high resale value upon completion of the Minimum Occupation Period (MOP) and availability of amenities such as hospitals, transport hubs and lifestyle options. As seen in the BTO project launch in 2016, the projects in Clementi, Ang Mo Kio and Queenstown saw an over-subscription by over 30 times, with an estimated 30 people vying for a single unit. This means that one’s chances of obtaining a flat is significantly reduced to a meagre 3%. Hopefully, this article could offer you a greater perspective on which are some of the projects that make your bet worth the while! 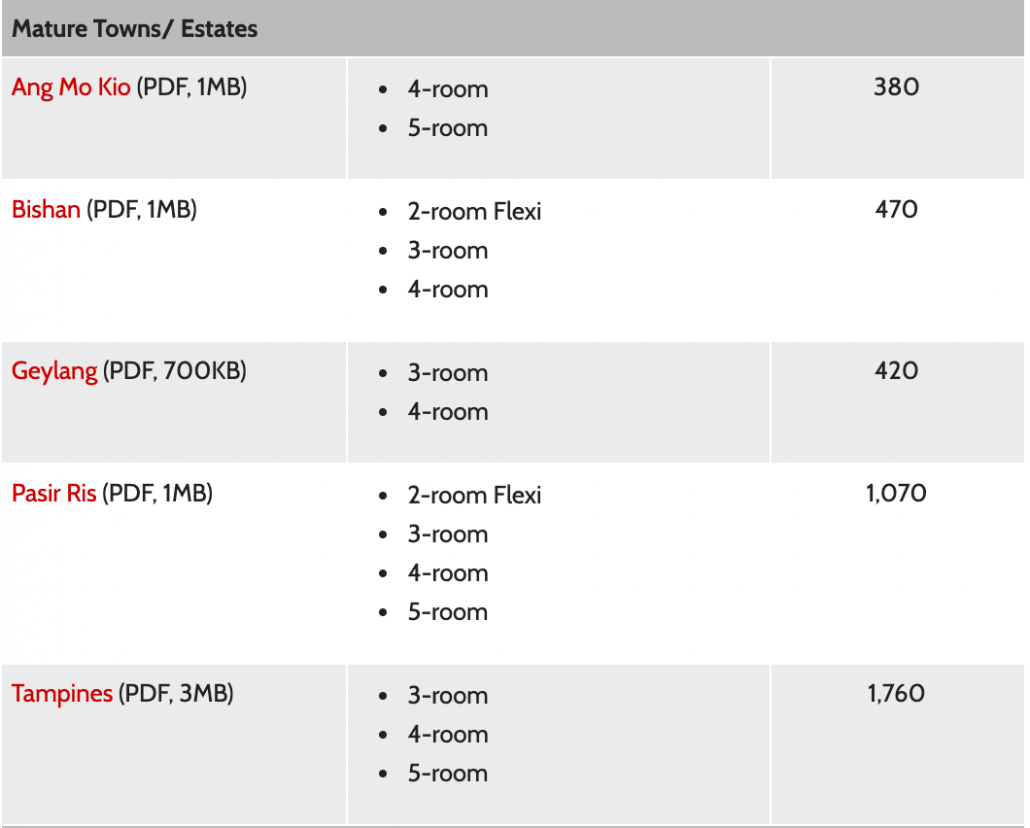 (list of all available projects in the mature estates) Source: HDB

For individuals who do not live in the east, it is often a gem that is overlooked because of its distance from the city. The eastern region of Singapore has seen one of the largest transformations over the last decade, with the addition of Jewel at Changi and major reconstruction of Downtown East. As URA rolls out a new vision for the east, Pasir Ris could just make it into your list of possible options and here is why: 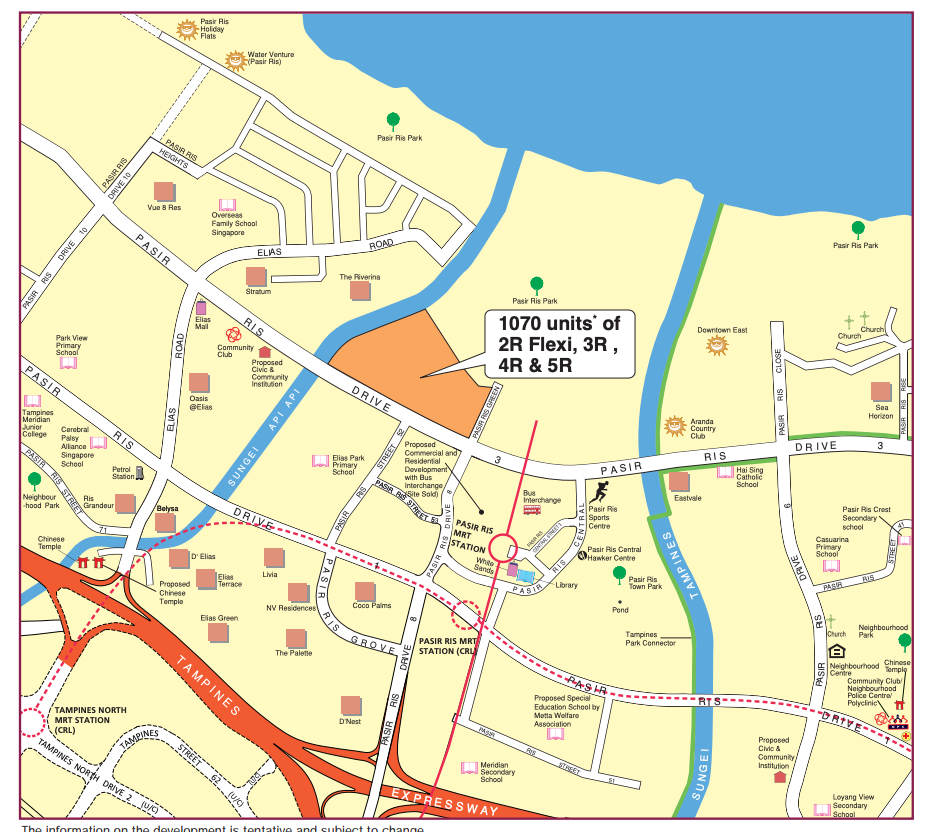 The BTO project is situated a short walking distance away from the existing Pasir Ris MRT station. Residents of Pasir Ris will also enjoy greater convenience upon the official completion of the Cross-Island Line MRT. For nature lovers, a piece of good news! The project will likely be integrated and assimilated into the adjacent Pasir Ris Park. It is not often that you see a BTO project adjoined to a park that is of such a large scale. If you are lucky, you might just get a unit that faces unobstructed greenery and a large water body that a Fengshui master would definitely agree to! For those who drive, the BTO project is an estimated 9-minute drive away from major highway network, TPE.

Many would know Pasir Ris for recreation, boasting of popular destinations such as Wild Wild Wet at Downtown East. The proposed BTO project will be located a stone’s throw away from an upcoming integrated transport hub which would be a mixed-use development which promises amenities such as a shopping mall, town plaza and polyclinic. This is on top of the existing White Sands mall which is a go-to hotspot amongst residents. Proposed plans will also see more facilities built towards encouraging community engagement such as the construction of a Civic and Community Institution. For the food-enthusiast, the BTO project will be located close to Pasir Ris Hawker Centre. For those with children in tow, Pasir Ris offers a wide range of educational institutions to choose from such as Park View Primary and Hai Sing Catholic School and Meridian Junior College.

Based on previous data from neighbouring past BTO projects, it is estimated that a 3-room unit will start at an estimated $290,000, a 4-room unit at $399,000 and 5-room unit at $513,000. While the BTOs in this estate are likely to come with a heftier price tag, applicants may be relieved to hear that property prices in Pasir Ris are expected to rise with new upcoming developments which would greatly boost the livability and popularity as a residential estate.

Ang Mo Kio is one of the top-picks for second-timer applicants under the BTO scheme given its long-standing history as one of the older planning regions across all mature estates. This is definitely a project worth considering especially if you have children and are looking to live near the city. However, the competition will likely be stiff given that there will only be 380 units up for grabs! 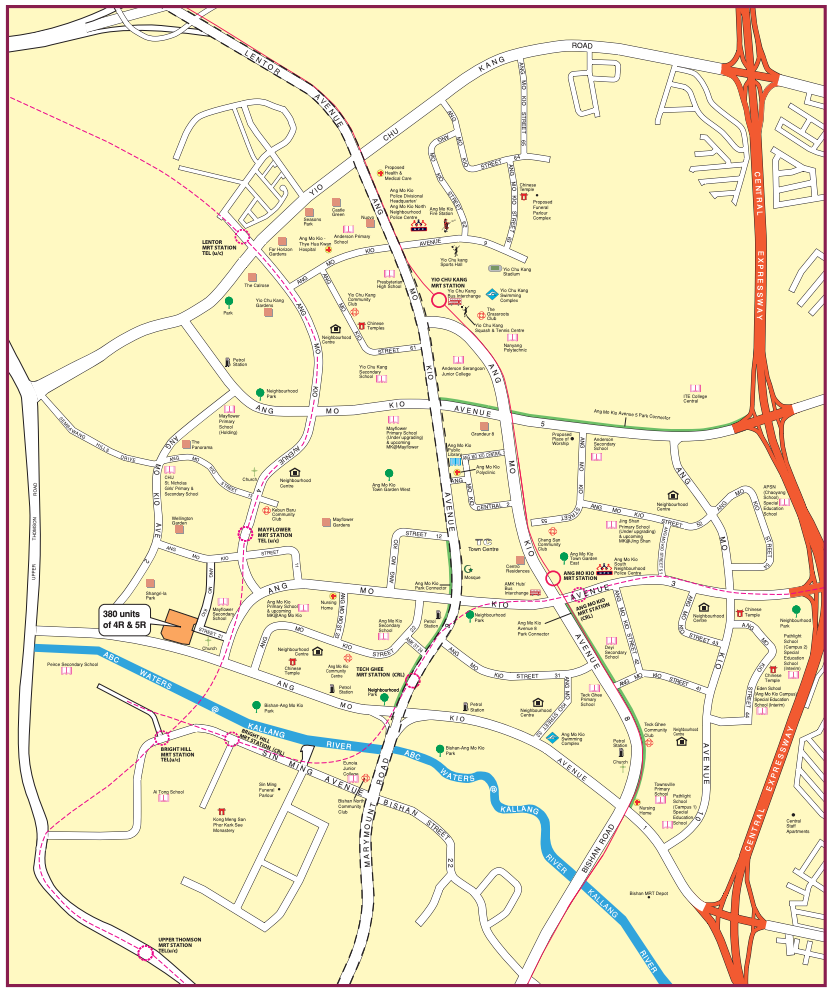 Upon the official completion of the Thomson-East Coast Line estimated to be at the end of this year, successful applicants of this BTO project will reap the benefits with a straight 30-minute journey into the heart of the city centre. This would likely coincide with the date of completion for the BTO project and residents are immediately able to enjoy the benefits upon moving in. The project site is an estimated 12 minutes away from Ang Mo Kio Central which has a major bus interchange and Ang Mo Kio MRT station, and for those who drive, the nearest expressway is the CTE which is a 14-minute drive away.

Ang Mo Kio is a neighbourhood well-suited for those with children as well. Situated close to some of the more popular and respectable educational institutions such as CHIJ St Nicholas and Eunoia Junior College, Ang Mo Kio can be a place to grow up and grow old. Childcare centres will also be made available at the neighbouring Kebun Baru BTO. For the health-conscious and nature-lover, living in Ang Mo Kio offers a variety of options when it comes to parks and green spaces such as the Bishan-Ang Mo Kio Park and Ang Mo Kio Town Garden West. Currently, there are no major malls situated close to the BTO project site, with the closest being Thomson Plaza. Nonetheless, residents can get access to daily necessities with nearby supermarkets and Sheng Shiong.

With only 2 options available, the 4-room units are projected to start at an estimated $410,000 and 5-room options at $535,000. This is based on past neighbouring BTO projects in the vicinity. While prices are definitely on the steeper end compared to projects in other mature estates, it is almost guaranteed that the resale value would make this venture worth the while, with HDB resale prices in Ang Mo Kio at one of the record highest, with 5-room options fetching prices in the $800,000 range!

A popular misconception and generalization about Geylang is that it is a red-light district, While it does have a nightlife aspect to it, Geylang has more than meets the eye. 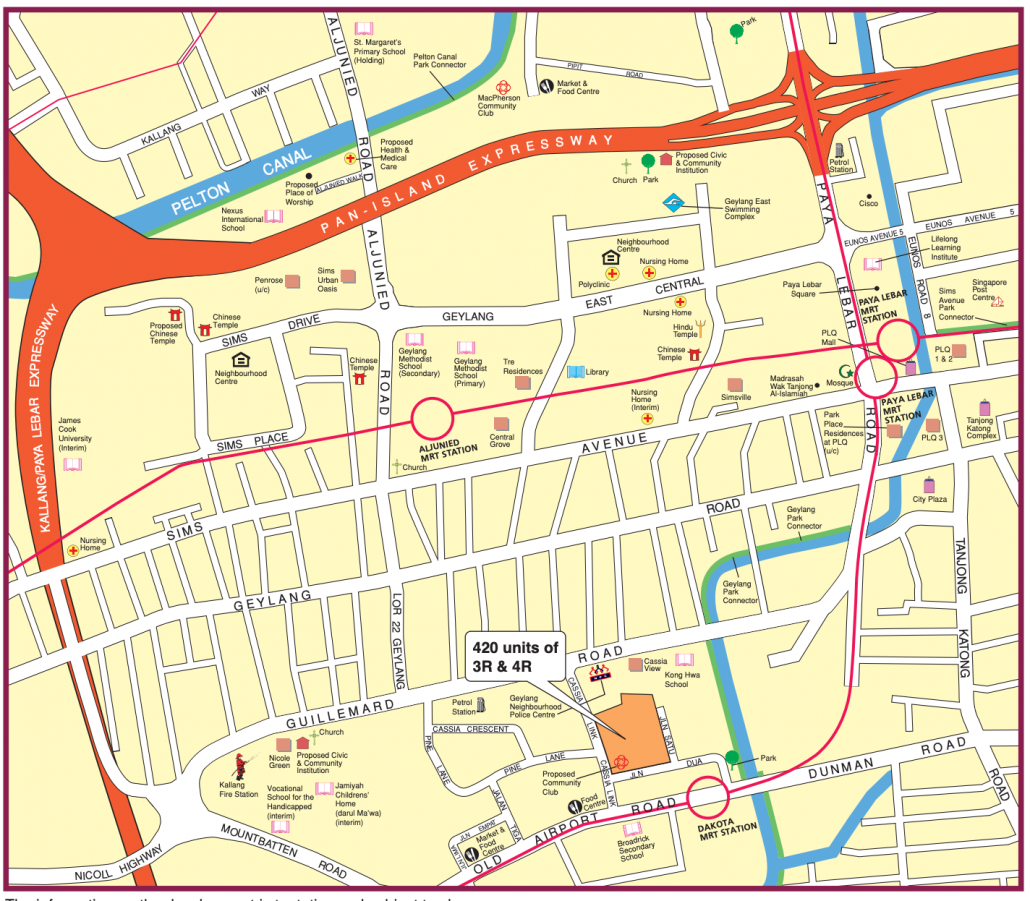 One of the most popular housing estates, it offers impeccable convenience into the CBD, via a short 15-minute bus or train ride (Dakota MRT). This convenience may incentivise the use of alternative forms of commute such as cycling, to which the government has made provisions for with the construction of park connectors or via Nicoll Highway. These park connectors also bring you to popular tourist destination Gardens By the Bay and eventually, to the city.

Sports-enthusiasts would be happy to know that Dakota MRT is only just 2 stops away from Stadium MRT, which holds Singapore’s largest indoor stadium and is home to a wide range of sports and recreational facilities such as the OCBC Arena catered to swimming and water sports, kayaking, rock-climbing and more. With the new plans set for Kallang under the “Kallang Alive” initiative which are set to be completed by 2025, residents of Geylang are definitely in for a treat, with a myriad of world-class lifestyle, recreation and entertainment options available right next door.

For those on the hunt for good food, you would be glad to know that this BTO project is located right across Old Airport Road Hawker Centre where you can get your cravings fixed. For families with children, Geylang is home ground for some of the most reputable schools such as Chung Cheng and Dunman High school. Just like the project in Ang Mo Kio, this project is definitely a favourite amongst many given the availability of amenities and convenience. Unfortunately, this will likely be the cause of very stiff competition and given that there are only 460 units, we are likely to see over-subscription rates rivalling that in 2016 as mentioned previously.

Just like in Ang Mo Kio, there will only be 2 available choices for unit types: 3 and 4-room units. 3-room units are likely to begin at $400,000 and 4-room units at $570,000 based on past historical data taken from the Kempas BTO project in 2019. Given its strategic location amongst and unrivalled levels of convenience to the city centre, a unit in this project will see a high resale value and is definitely a good unit for rental purposes.

While we were not able to touch on other BTO projects in areas such as Bishan and Tampines, it does not mean that they are any less ideal. We have chosen to take a closer look at Ang Mo Kio, Geylang and Pasir Ris given that these projects are within close proximities to some of the major changes happening in surrounding regions. We hope that this article has given you a broader overview of what is to be expected for the various BTO projects. Should you be applying for a flat in this upcoming launch, check out HDB’s website for regular updates! While it is definitely everyone’s desire to live in the most convenient and accessible unit, it is important to plan ahead and factor in important decisions such as budget, needs, and perhaps even your family’s timeline (i.e children or older parents).

Which projects should you look out for in Singapore’s largest BTO launch this...

COVID-19: Resilience in the eye of a storm
Scroll to top
WordPress Image Lightbox