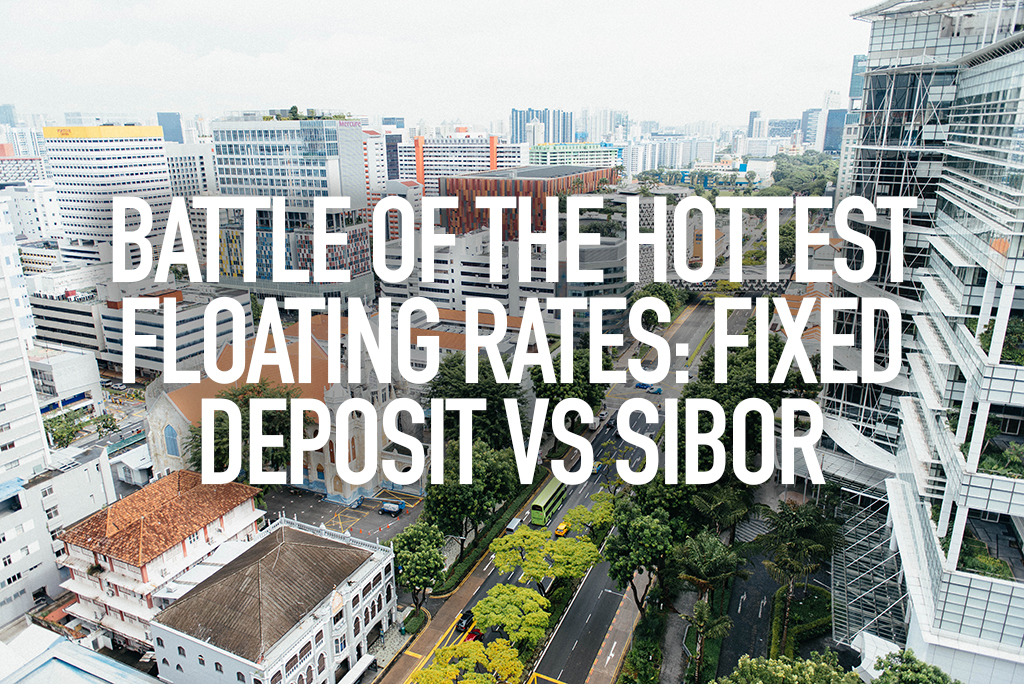 When it comes to purchasing your own home, many homeowners will start to wonder which home loan package to take up. Well, if you are one of them, you are in luck because the following is a detailed analysis as well as some advice. But before we get down to the details, let us first understand the types of loans that are being offered in the market for home buyers.

The interest rate of such home loan packages are pegged to the bank’s fixed deposit rate, therefore all the rates of such packages are being managed by the banks instead of external market conditions. Basically, what this means is that the Fixed Deposit Pegged Mortgage (thereafter known as “FDPM”) is pegged to the rates that the bank offers you if you put a fixed deposit with them.

The most common FDPM rates are the 9-month fixed deposit rate and the 36-month fixed deposit rate. Basically, how banks determine the rate is slightly tricky since the promotional interest rates of banks change monthly, but the bank’s board rate remains rather stable. Thus, you should take advantage of the prevailing promotional rates at the point you wish to make your deposit. However, take note that the rates will also differ depending on the amount you are depositing into the bank.

This is the interbank interest rate and it is being used as a base rate in mortgages. It is derived from a comparison across at least 12 banks and it is administered by the Association of Banks in Singapore (ABS).

Therefore, it is also known as the bank managed rate, and it is normally expressed as 1M SIBOR, 3M SIBOR, 6M SIBOR, and so on. The numbers represent the periods in months at which your loan rate is being revised. For example, 1M SIBOR would mean that your home loan interest rate will be revised monthly.

Generally, a SIBOR package with a longer period will have a higher rate since you will be enjoying a more stable rate. A SIBOR package consists of 2 parts: the SIBOR rate, and the bank’s spread. The general consensus is that SIBOR is highly correlated with the US Federal Reserve Rate.

Fixed-rate packages are like an insurance plan to protect you against any rise in rates; however, the downside is that you will have to pay a premium to enjoy such protection. What this means is that you will be able to enjoy the same interest rate for a fixed period of time which is normally between 1 – 5 years. After the fixed period lapses, your loan repayments will be charged at a variable rate.

Now that you have a better understanding of the two different types of packages available in the market, this next segment is a detailed analysis of the pros and cons of using FDPM packages.

Firstly, a home loan package like this is essentially a “double-edged sword” for the banks due to the nature of the interest rate. With more interests earned from home loans when the banks raise the rates, this also means that the banks will have to pay out more interest to their fixed deposit account holders.

Therefore, it would not seem as attractive to the banks for them to increase your FDPM rate. On the other hand, for board rates, banks are able to increase it whenever they want as it does not incur much cost since board rates are less transparent.

Since FDPM packages are based on the banks’ own fixed deposit rate, banks therefore get the full control of the interest rate. This means that without any external influences, the banks will be able to raise or lower their fixed deposit rates on their own accord. This is also why FDPM rates are also known as bank managed rates.

Likewise, FDPM packages are being fully managed by the banks and are not affected by any other external conditions. Therefore, there is no visibility of how the rates are being managed and it will be difficult for us to forecast the changes in rates.

For example, if you were to walk into any bank branch and ask for (1) the 18-month fixed deposit rate, and (2) the promotional rate. The rate that you are given is actually the bank’s promotional FD rate (2). Thus, the shelf FD rate is typically not given to the majority of the clients.

Pros and Cons of SIBOR

This is one main advantage of SIBOR loans since they can fall much faster than their FDPM counterparts when they start to fall. Borrowers who choose to brave SIBOR will potentially be able to benefit when SIBOR rates start to drop. Whereas, borrowers with FDPM rates will unlikely be able to enjoy such types of windfall in the immediate term.

Due to the higher volatility of SIBOR loans, SIBOR tends to fluctuate more. Therefore, although SIBOR can fall fast, it too has the ability to rise fast. Hence, this will potentially affect the borrowers that are taking up the SIBOR packages, since they may need to pay more if SIBOR starts to soar.

FDPM rates tend to rise less frequently and in smaller increments. Thus, borrowers that choose to take up FDPM loans are being spared from the shock of a sudden skyrocketing interest rate.

What are the factors that affect the rate?

*Disclaimer: All rates are sourced to the best of our abilities and may not be 100% accurate. As rates change from time to time, it would be best to get in touch with the individual banks or with us to find out the latest package offerings. 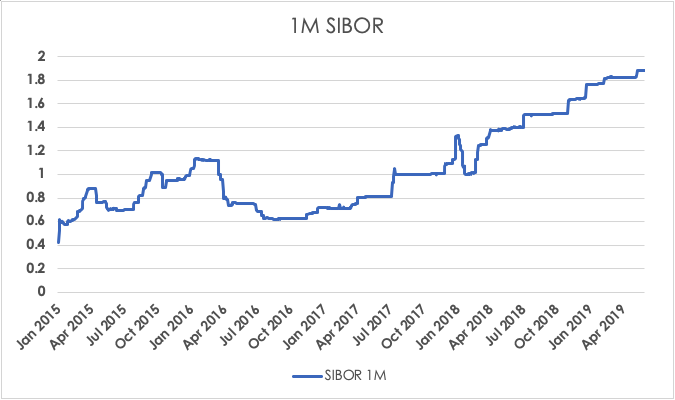 For the next example, let’s assume that we are in 2017’s interest rate environment with today’s SIBOR and FDPM packages’ makeup.

In the above example, if interest rates were to simulate 2017’s environment, SIBOR would be a more attractive package than DBS’s FHR.

Now let us look at the graph for the general trend of SIBOR and FD rate. 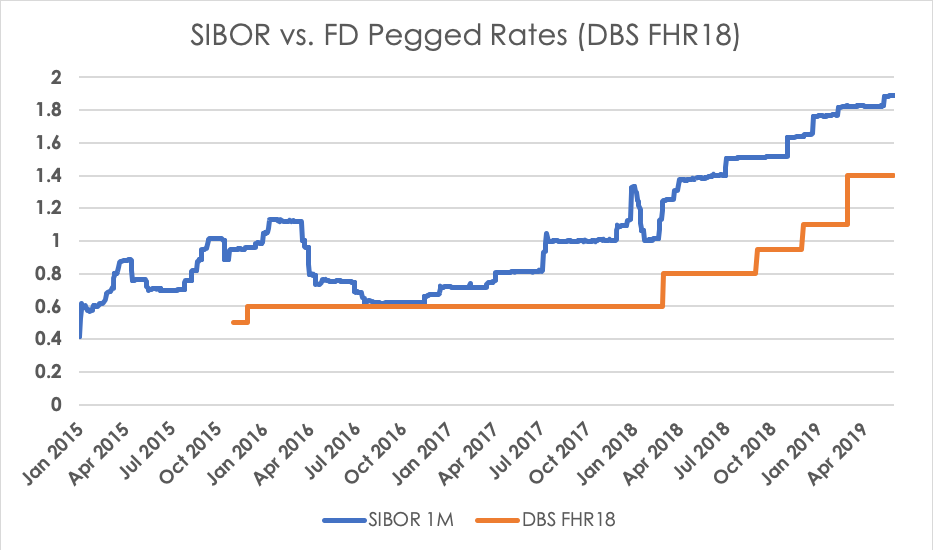 *Both rates in the above illustration do not include the bank’s spread.

How often do banks change their rates? 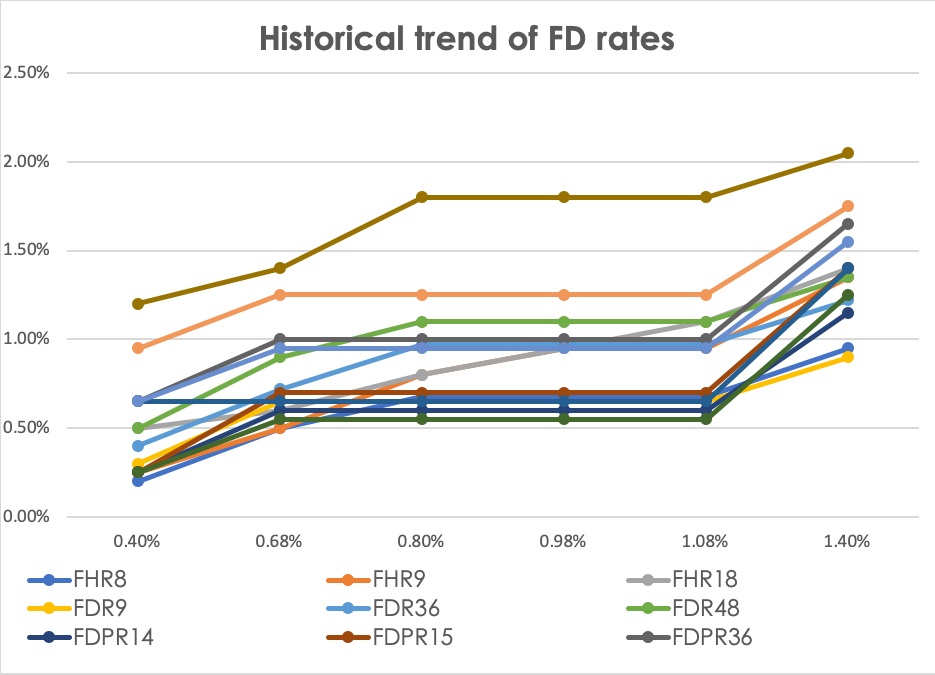 According to the data above, DBS FD packages fluctuate most.

“After comparing the SIBOR and FD trend, it is actually safe to say that they are rising in tandem, however, FDPM rates have a delayed response.”

Thus, it is very subjective as to whether SIBOR or FDPM rate packages are better because of one specific makeup and also the interest rate environment at the point in time.

If you are still confused at this point in time, I do have some ending advice for you. If you want to go for a floating rate, know that it largely depends on the economy and the individual package makeup. Next, you will also need to determine whether you prefer a bank or market managed rate, as this will help you decide whether you will go for SIBOR or FD rate package. But if neither of which appeal to you, go for fixed-rate home loan packages via redbrick.sg.

*Disclaimer: All rates are sourced to the best of our abilities and may not be 100% accurate. As rates change from time to time, it would be best to get in touch with the individual banks or with us to find out the latest package offerings.

Thomas Chew
Thomas takes pride in helping people with their financing needs. Before joining Redbrick, he enjoyed a celebrated career in the local banking scene, acquiring numerous sales and service awards to his name. Many years on in banking, Thomas takes his experience and now specializes in mortgage advisory. Exuding confidence in his work, he believes that every client should be prepared to be wowed by his award winning service.
Latest posts by Thomas Chew (see all)
July 15, 2019/by Thomas Chew
https://www.redbrick.sg/wp-content/uploads/2019/07/Battle-of-the-hottest-Floating-Rates-Fixed-Deposit-vs-SIBOR.jpg 684 1024 Thomas Chew https://www.redbrick.sg/wp-content/uploads/2018/02/RBMortgageAd-01Colour-300x85.png Thomas Chew2019-07-15 16:45:242019-11-18 18:34:27Battle of the hottest Floating Rates: Fixed Deposit vs SIBOR