Is It Worth Spending Extra For Resale HDB Flats In Mature Estates?

Location is one of the key considerations when purchasing real estate. In Singapore where over 80% of the local population resides in a Housing Development Board (HDB) flat, home buyers are often concerned about the HDB estate they would be staying in. Broadly speaking, HDB estates can be categorized into mature and non-mature. Mature estates such as Queenstown and Ang Mo Kio are known to have higher prices while non-mature estates include Bukit Panjang and Punggol. But what are the differences between mature estates and non-mature estates, and why do they command higher prices?

1. Most Mature Estates have larger apartments

However, the size of newly build flats otherwise known as Built To Order (BTO) does not differ much across mature and non-mature estates. Yet, BTOs in mature estates have been sold at a premium. The price disparity could be explained by the following reasons.

Imagine a town that has already been developed for over 20 years as compared to a new town that has only been habituated for roughly 5 years. Obviously, the older town is likely to have a more established community and more well-developed amenities such as transportation networks, community centres, and green spaces. For instance, the Bishan-Ang Mo Kio Park was built in 1988 years, whereas ABC Waters Bukit Panjang Pang Sua Pond was only completed a few years ago.

On the other hand, non-mature estates may feature amenities that are still developing, which may not be ready when you move in. Given the detailed master plans, it is only a matter of time before non-mature estates are fully furnished. Moreover, some non-mature estates like Punggol already host a range of well-developed facilities, such as an intricate LRT network and easy access to Waterway Point. These areas are likely to be labelled as non-mature as the state has plans to further develop the area.

3. Single Singaporean applicants can only apply for flats in non-mature estates.

If you have yet to find a significant other and am 35 years old or older, you may apply for a two-room Flexi BTO flat in non-mature estates under Singles Singapore Citizen & Joint Singles Scheme. However, there are no constraints to the location or apartment size for resale HDB flats. Since singles are restricted to only buying resale flats for mature estates, this may have contributed to the premium resale HDB flats in mature estates hold.

However, the trend of mature estates commanding more money may not stay for long. Aside from the competing forces of decaying leases, more home buyers are beginning to recognize the perks of non-mature estates such as having cheaper BTO options.

Since mature estates feature older HDB buildings, this also means that the resale flats often have a short remaining tenure. The impact of decaying leases also alludes to a larger issue of redevelopment. One of the reasoning for HDB flats having only 99-year long tenure is to ensure that the older buildings could be easily returned to the state to redevelop. Given the limited land Singapore has, urban planners often plan many years in advance. Even if individuals do not mind having a shorter lease, this may not be able to fight against the redevelopment plans.

Additionally, if the remaining tenure would expire before the buyer or the youngest co-buyer turns 95 years, only a fraction of the mortgage loan quantum would be available to the borrower. Consequently, more cash and CPF would have to be paid.

More often than not, resale housing prices reflect the demand and supply of the market and are not solely based on the intrinsic value of the property. Additionally, the future of our urban landscape is likely to be incorporated with technology. This means that the importance of having smart homes is increasingly prominent. As compared to older towns like Queenstown, newer non-mature estates like Tengah also feature systems for smart energy integrated including a centralized cooling system.

3. Future amenities would make the wait worth it

As expected of Singapore’s urban planning system, most non-mature estates already have developed amenities and more planned on the way. In the case of Jurong East, it is expected to have improved connectivity to the west region once Jurong Regional Line is built. Yet, it is labelled as a non-mature estate in spite of the well-connected transportation network to various parts of Singapore and the congregation of multiple notable malls at the town centre. This goes to show that non-mature estates are not underdeveloped but simply developing.

Whilst the amenities are being built, this also means that the BTOs in non-mature estates are likely to be priced lower than their potential.

Thus, it might be a worthy investment to go for BTO in newer estates. If you are a young couple looking for your matrimonial home, investing in a BTO in new towns like Tengah may prove to give better returns than mature estates. Simply put, mature estates are already mature and may have fewer appealing amenities when you put your apartment up for sale in another 20 years’ time. In comparison, the forward-looking developments in new towns are likely to be more competitive in the market given their relatively newer services. 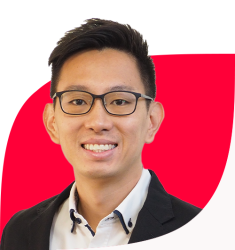 Lionel Sim
Lionel had accumulated a wealth of experience as a financial advisor where he enjoyed understanding people's financial needs and helping them out. With his big passion for finance and investments, he had taken further education in finance in recent years.