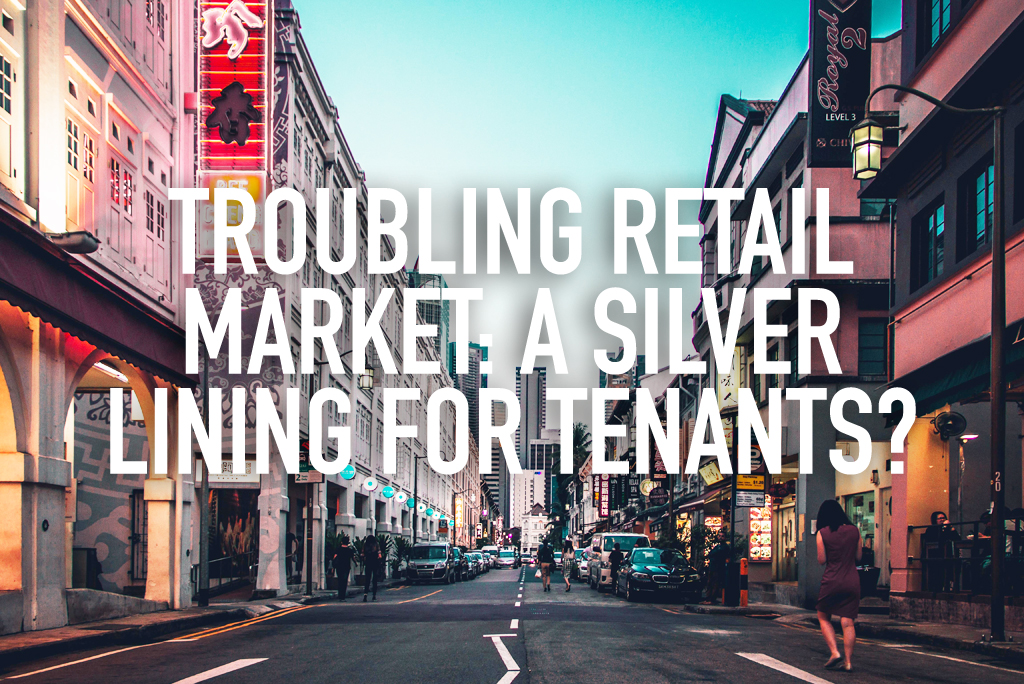 Singapore’s retail property market has faced a challenging climate over the past 2 years. In general, the retail scene has faced constant challenges by the rising popularity of e-commerce,

where consumers and shoppers can simply make purchases online and delivered right at their doorsteps. This is a threatening situation to retail tenants – why travel to the mall when the shopper can just order goods from home?

This has caused a huge impact to retailers everywhere, to the point where even renowned companies faced the prospects of being bankrupt. Toys ‘R’ Us, the largest toy chain in the United States has already filed for bankruptcy protection in US and Canada due to a combination of fierce online competiton as well as a long-term debt of more than US$5 billion (S$6.7 billion).  On a more local scale, shopping malls everywhere are facing ever-increasing vacancy rates as more retailers are unable to sustain their business. Just recently in September 2017, Singapore’s popular restaurant cum bar, Lepark, had shut its operations with its co-owner citing that the business is ‘unable to stay own’. Likely, it suffered from high rental cost which made it challenging to be profitable. 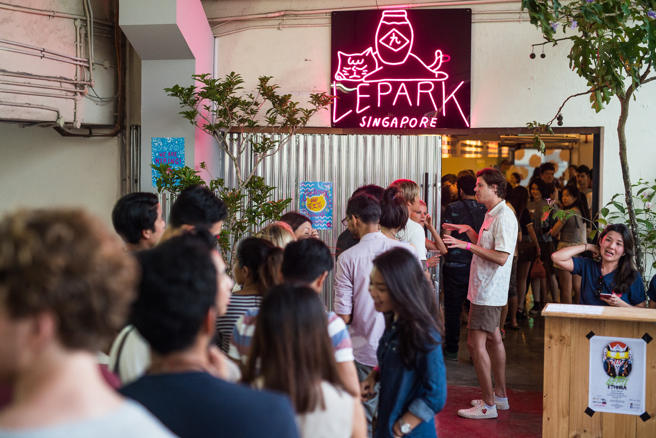 As depicted by the graph below from DBS’ Retail Real Estate (Singapore) report, Singapore is not spared from this situation, with the past 4 years being especially tough for landlords and tenants alike in the retail scene. Occupancy rates shown a general downwards trend since 2013, and it is projected to continue in the short to mid-term as well. As such, you can expect to see more and more vacant spaces around Singapore’s shopping malls, especially in the central areas of the country. 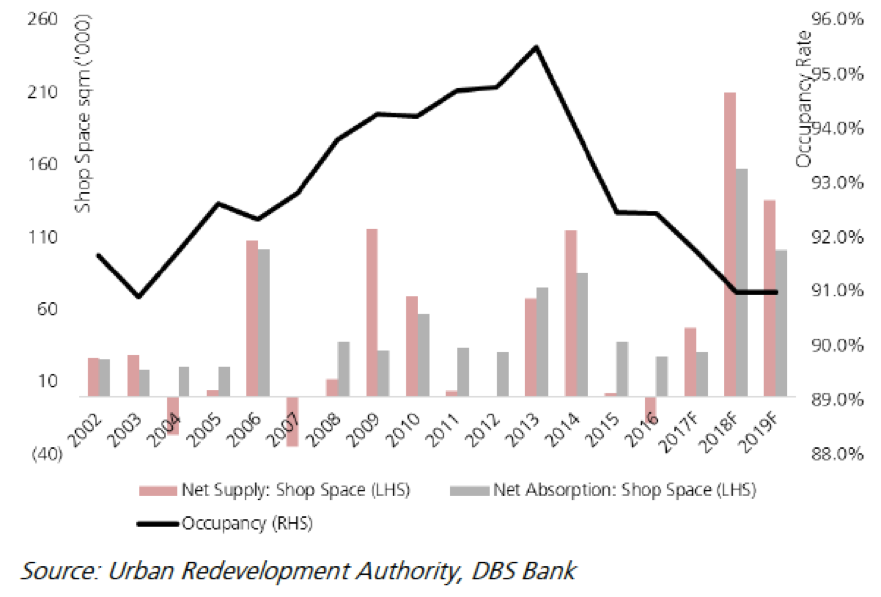 Nevertheless, despite all the gloom and doom, therein lies an opportunity for retail tenants to capitalise on: the bottomed out rental rates. Of course, from a landlord’s perspective, these are rather pessimistic and bearish times – most are scrambling to offer extra incentives and lower rental rates so as to improve their occupancy rates and gain more rental income. It is precisely because of this that an opportunity is presenting itself to prospective retail tenants – the prospects of lower rents. 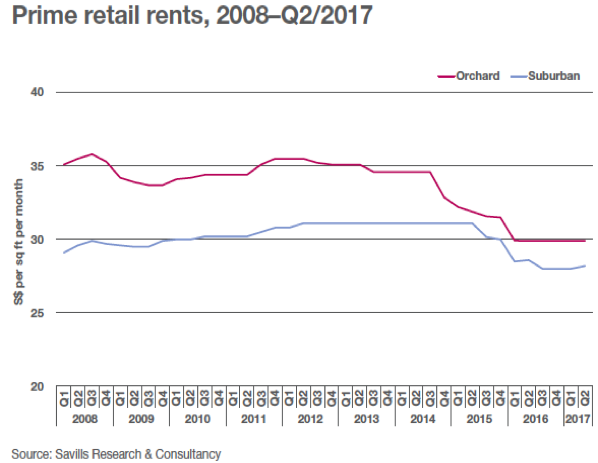 As we all know, the property market works in a cycle and based on the latest statistics and circumstances, backed by Savills’ latest research findings in the graph above, rental prices for the tenant market has seemingly bottomed out. This is the best time to for tenants, new or old, who are looking for new spaces to take advantage of (before it starts to rise again!)

However, we do not wish for you to capitalise on the situation blindly. We will explain to you briefly the current market ongoings which have contributed to the situation of bottomed-out rents. Firstly, to put it briefly, this can be explained via a simple economic concept: demand and supply. Allow us to explain to you 2 simplified scenarios (which occurs all the time in any markets):

Currently, Singapore’s retail market is facing the former scenario. Rental prices of retail spaces have been on the lowest ever over the past 10 years, and it seems to have bottomed out. Furthermore, steps have been undertaken by most landlords, current tenants alike and even the government to boost their footfall. Singapore’s tourist inflow have always been correlated and a key pillar for the retail industry, and the Singapore Tourism Board (STB) has been very successful and still implementing more marketing strategies to boost visitor arrivals. In 2016, Singapore’s international visitor arrivals amounted to a new record high of 16.4million and tourism receipts of about S$24 million.

Simultaneously, in order to ride on this increasing tourists wave, malls are upgrading themselves into tourist attraction worthy places, such as the upcoming Jewel Changi Airport which will not just a host an array of retail tenants, but also house Singapore’s largest indoor garden and the world’s largest indoor waterfall, as well as a daily light and sound show. Also, the new Funan DigitaLife Mall will be the first commercial building in Singapore to allow patrons to cycle through the building and have rooftop farms as a recreational area for visitors. In summary, the point here is that landlords are taking an out-of-the-box approach to renew interest and footfall by offering an experience that otherwise can’t be obtained if you merely shop at the comforts of your home (or hotel, for tourists). Nevertheless, despite the generally weak consumer sentiments as explained, there are positive signs that it is being resilient and slowly stabilising. According to Savills, average rents in suburban areas has recorded a 0.7% increase from the previous quarter to S$28.30 per sq ft, while average rents in the prime shopping street of Orchard held firm at $29.20. Now, what is significant is the fact that the gap in rental prices between suburban malls and Orchard is a mere 90 cents difference currently

As such, before the market shows more signs of recovery, now may be the most optimal time to enter the rental market for new spaces especially in the Orchard area, and ride on the waves before rental prices will begin to recover in the mid to long term. Furthermore, as of June 2017, Singapore’s retail sales has continued growing, depicted by a 2.7% increase Year-on-Year (YoY), partly attributed by the sales of jewellery and watches which grew by 15.2% YoY as well.

With bottomed out market rental rates and a continuously increasing economy and retail sales, conditions are almost perfect to be taken advantage of – prime retail spaces are there for the taking. Also, the fact that more retail malls are taking approaches to upgrade shoppers’ experiences, this can potentially increase the footfall of consumers and patrons over the next 2 or 3 years. As such, there are 2 ways to go about doing it now for prospective tenants:

We hope this article has given you a good insight on the current ongoings of the tenant market in the retail industry. On that note, should you, as a prospective retail tenant, require any sound advice on commercial property loans, it would be wise to contact a trusted local mortgage advisory company such as Redbrick so as to obtain the most feasible and optimal financing solutions. However, if you are interested in investing in residential properties as well, our blog offers various forms of insights as well as comprehensive how-to-do guides pertaining to the topic.

Landed properties in Singapore: What you need to know